Today, on May 11, 2016, I find myself looking back and celebrating. One year ago today, my life took a difficult turn onto a road, a journey that until recently, I couldn’t see the positive of. Last year I underwent what has undoubtedly been my most difficult surgeries to date: a release of my right heel chord and the re-breaking of my right leg in three places along the Tibia and Fibula. I suppose start explaining a few months earlier. Around November 2015 I began noticing that my right leg, (which has always been the weaker of the two, because of the CP which mostly affects my lower extremities) was weaker than usual. I began falling daily, the Patella dislocating on a weekly basis. I ignored it as best I could and returned to Bermuda for Christmas a month later. I remember speaking with my Mother, she pleaded with me to take this seriously, to have this looked at before I injured myself. I agreed she was right.
I returned home weeks later and the night I returned, that very night, the Patella once again dislocated, causing me to fall and strike my head. I knew that night, this was unsafe and I couldn’t allow it to continue. What I didn’t anticipate was just how difficult this was going to be. Blood tests, countless X-rays, MRI’s and I found myself about a month and a half later being told that I have two options: I could continue the way I was headed, or I could see this problem fixed. What was the problem? Cerebral Palsy affects how my joints mesh together and they aren’t perfectly aligned. In this instance, the misalignment was causing severe stress on the outer ligaments of my knee, it had become unstable under the constant strain. The photo in the top right corner illustrates how skewed the bone was. Ideally, one should see a straight line going from the hip, to the knee and down to the foot. In the same illustration to the right, shows the “After” image of three months of lengthening and manipulating the bone which was set in place by a Spatial Taylor Frame. 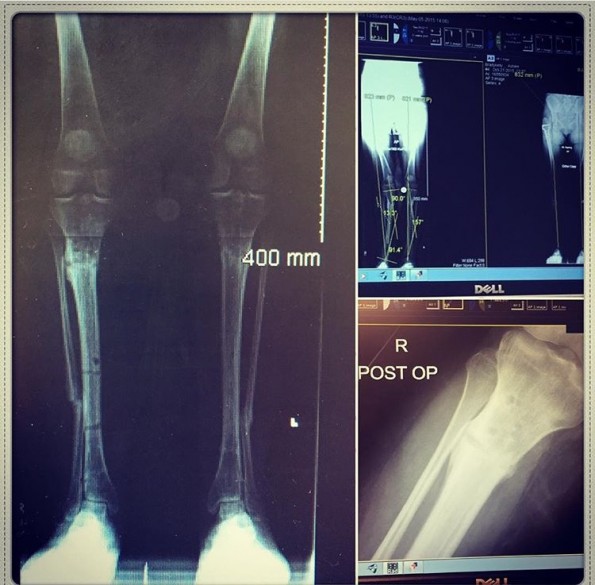 The Spatial Taylor Frame is the latest external Fixator and now looking back I can see it as an amazing piece of equipment that is nothing short of a miracle, I assure you for the seven months I had this, it was a Medieval Torture Device, emphasis on EVIL! The frame had attached to it eight separate rods, five on the top under my knee, three on the bottom. They supported the breaks but also, after being manually “dialed” (which let me answer the question, was as painful and gruesome as it sounds) they manipulated and stretched the bone to the correct positions. Hey, it’s not as bad as it sounds, I gained an inch and a half in height, which was super exciting! I could not weight bare for the first four months and was reliant on a wheelchair for mobility. Aside from the pain which was constant and mind-numbing, the loss of mobility was the hardest aspect to accept. I am thankful to have been raised by a mother, supported by a family that didn’t allow my disABILITIES to slow me down. The only limitations I had were the ones I allowed to overcome me. I learned how to adjust, adapt and when all else failed, I cried for a long while. I don’t have the best memory, I can however, recount almost everyday of those seven months. There were more days then not that I thought, “There is no way I am going to survive this,”. I cried more than I’d admit in the safety of my room because I couldn’t sleep with the frame. A part of me withered when someone looked at the frame with the question in their eyes. Admittedly, it was difficult to see the positive aspects whilst I was in the middle of the journey.

Video (1)
Yesterday, I took my first steps aided by my cane and I’m not even going to deny that I did this without the biggest smile on my face. My road to recovery is far from over, but those steps, they were the hugest in my recovery and I’m so proud.

The link below features Jordan Bone, who is an inspiring, amazing beauty blogger that I happened upon who has been kind enough to lend her support and advice through my journey. She speaks to breaking the barriers of labels, which for this particular post I thought was so fitting. In her honor, and of the seven months where I fought to be more than a label I want to share seven things that I learned:
1. You are going to fall down in life, many, many times, your strength is in standing tall again.
2. You can either be your own best supporter, cheerleader or your harshest critic. The world will critique you enough, so lighten up.
3. The world isn’t against you.
4. You can fight the inevitable or you can accept and deal with it head on.
5. Tears are not weakness!
6. People don’t have to have experienced your circumstances to offer support.
7. DO NOT SHUT OUT YOUR SUPPORT SYSTEMS! Recovery means nothing without these individuals to celebrate it with.

I will leave you with one final quote from Jordan, who illustrates that even makeup can teach us important lessons.

“Contouring teaches us that it is similar to life. There is darkness, there is light. Find the balance between the two, for that is where the beauty lies,” – Jordan Bone